The holidays are upon us!

This week’s Truthmissiles.com “All Truth Team: Reagans and Obamas Awards”:

1. THE TED CRUZ AWARD (for starting meaningless fights without considering whether they accomplishing anything)–
Winner: SAINTS AND PANTHERS

The Saints (5-8) and the Panthers (4-8-1) SHOULD NOT MAKE THE PLAYOFFS this season. They are horrible and they are playing horrible. Yet on Sunday, there they were at the Superdome in New Orleans battling for a win that could propel one of them to the NFC South Division title and a playoff berth.

So, with such high stakes, these two great teams decided to do what any great team does: engage in a massive, violent mid-game brawl risking the ejections of key players in a critical game.

Take a look at some highlights from the “Rumble on the Bayou” (Trademark Truthmissles.com)…

Only one player, Panthers’ tight end Brandon Williams was ejected as a result of the brawl, but luckily for the Saints, despite this, they were able to maintain their MOMENTUM OF TERRIBLENESS and still lost the game 41-10.

Because of this horrible loss, the Saints (5-8) were able to keep themselves right in the thick of the 3-way battle for the NFC South title, along with the Panthers (4-8-1), and the Falcons (5-8). All, obviously, are stellar teams. Only the Buccaneers (2-11), who were finally eliminated from playoff contention THIS WEEK with a loss can’t make the playoffs in this division.

Only in OBAMA’S AMERICA could such horribleness be rewarded.

But, like any true champions, all of these teams can still get the job done when it comes to punching their opponents in the face.

And both of them enjoy the 80’s. REAGAN enjoys it as the decade he was leading AMERICA to greatness. GREEN enjoys them as the number of yards from which he scored a great touchdown in today’s game against the Steelers. See, it’s a connection as natural as Angelina Jolie and Billy Bob Thornton.

And speaking of good connections, take a look at this video of Green’s 81-yard touchdown catch, which also involved juking two defenders… 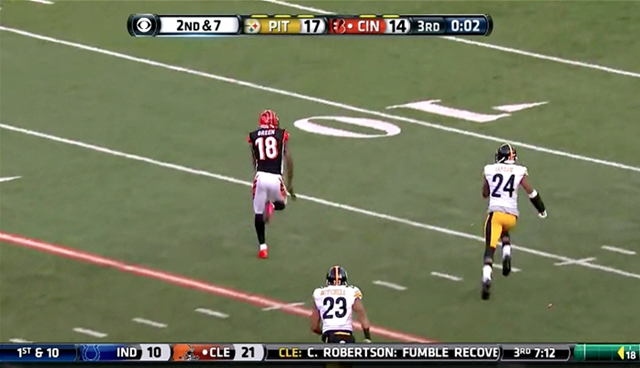 Green’s touchdown gave the Bengals the lead, a lead that was not important because Bengals quarterback Andy Dalton got injured and the Steelers went on to beat the Bengals 42-21.

Green still had a good day nonetheless, exemplifying the free market values of REAL AMERICA as seemingly hundreds of his commercials endorsing “Beats” wireless headphones aired during the NFL’s games across America on Sunday.

Green sells Beats, but you might say that on Sunday, his Bengals GOT BEAT.

And while the Beats headphones in the commercial were WIRELESS, one might say the Bengals’ performance today was FIRELESS. It lacked FIRE.

3. THE CHRIS CUOMO AWARD (for excellent use of descriptive language)
WINNER: Me, Sheeplenumber1

I may not be the MASTER OF PUNS, like CNN’s Chris Cuomo, but I feel that my excellent use of language in this article deserves some recognition.

And since the LIBERAL MAINSTREAM MEDIA is unlikely to bestow any worthy accolades like the Pulitzer Prize or the Peabody Award, I’ll just give myself an award. This award.

Let’s take a look at some of this excellence…

“it’s a connection as natural as Angelina Jolie and Billy Bob Thornton. And speaking of good connections, take a look at this video of Green’s 81-yard touchdown catch”

Green sells Beats, but you might say that on Sunday, his Bengals GOT BEAT.

And while the Beats headphones in the commercial were WIRELESS, one might say the Bengals’ performance today was FIRELESS.

And, I’m sure liberals arereading these and thinking, “Wait, none of these are even puns.”

Sometimes you just gotta stop worrying about whether or not it’s a pun or an analogy, or just a cheesy horrible use of the English language and take a page from the MASTER OF BUSINESS AND FREEDOM and use a pun or ten…

Business is like a jungle. And I am like a tiger. And Dwight is like a monkey that stabs the tiger in the back with a stick. Does the tiger fire the monkey? Does the tiger transfer the monkey to another branch? Pun. There is no way of knowing what goes on inside the tiger’s head. We don’t have the technology. – Michael Scott

But if that doesn’t feel like a REAL AWARD, just like OBAMA isn’t a REAL AMERICAN PRESIDENT, then suck on this BONUS AWARD, you entitled bastards… 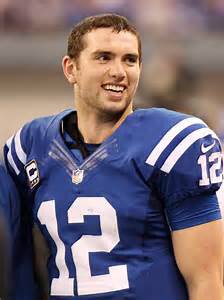 Luck, on Sunday, threw a game winning touchdown to beat the Browns and set an NFL record for most yards passing in his first three seasons, passing Peyton Manning’s record of 12,287 by 10 yards.