The NFL, like Thanksgiving, is a rich cornucopia of textures and flavors, winners and losers, Reagans and Obamas.

At times, it can be subtle and difficult to form knee-jerk opinions about.

That’s why we do that for you each week in the TruthMissiles.Com “All-Truth Team.”

1. THE OBAMA AWARD (for being as bad as advertised) —
Winner: NEW YORK GIANTS, horrible football team 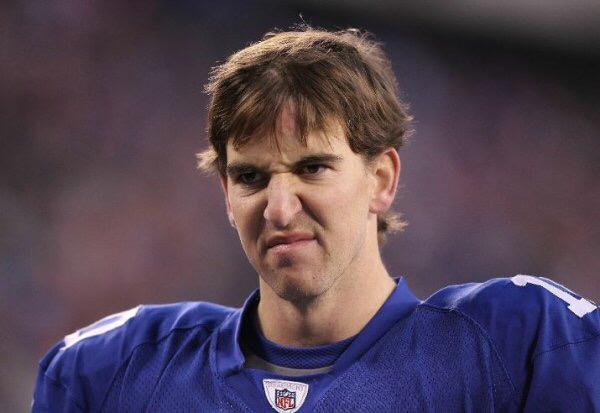 For thirty minutes on Sunday, the New York Giants managed to convince America (or at least the portion of it that tuned in to the week’s worst matchup) that they were not, in fact, one of the worst football teams in the NFL and losers of 6 straight games.

They were up 21-0 at the half, and Eli Manning looked like a real-live NFL quarterback.

Then, the second half happened.

The Jaguars managed their largest comeback ever, rallying from a 21-point deficit to beat the New York Giants 25-24 on Sunday for their second victory of the season.

“It was an unbelievable way to win it,” Bortles said. “It’s awesome to be a part of this team and see how much fight they have. …We weren’t sharp in some situations, but we were sharp when we needed to be, and that was good.”

In other words, the Giants, a team that constantly believes themselves to be “good” in the face of all evidence to the contrary, blew a 21-point halftime lead to a team with one win, a team that admittedly was not “sharp” during that very game, and lost. They LOST! And, oh BTW, it was the largest comeback in the team with only one win’s history.

Bad enough for you to compare them to OBAMA? It gets worse…

It was the Giants’ seventh straight loss.

The Giants had two fumbles returned for touchdowns.

The Giants had just 75 total yards in the second half.

Against the one-win Jaguars.

2. THE COMMUNIST AWARD (for being the opposite of patriotic) —
Winner: AARON RODGERS, Quarterback, Green Bay Packers

If you really love AMERICA, you should be as patriotic as possible at all times. And, if you want to be PATRIOTIC, the ONE THING you just don’t do is BEAT THE PATRIOTS (it’s how they won 3 Super Bowls).

Yet, that’s exactly what Aaron Rodgers did on Sunday. He BEAT THE PATRIOTS!

The Green Bay Packers fended off the New England Patriots 26-21 Sunday in a high-profile matchup between Super Bowl contenders. Rodgers bested Tom Brady in the first meeting between the star quarterbacks as starters. Rodgers connected with Richard Rodgers and Jordy Nelson for long touchdowns.

That’s the only label you can apply to someone who HATES PATRIOTS.

Rogers is just part of OBAMA’S anti-America, anti-New-England propaganda machine. For Obama, it’s all about building up his socialist plot by knocking America down. Today, Aaron Rodgers revealed himself as another one of Obama’s patsies, prepared to do anything to help destroy our freedom… even trying hard at athletics.

In contrast, Tom Brady and Bill Belichick have long been committed to winning THE AMERICAN WAY: by spying on opponents and videotaping their practices.

Rodgers, Obama, and the Dumb-o-crats aren’t interested in that. They just want to destroy freedom and those who fight to preserve it.

Side note: Mitt Romney is a Patriots fan and OBAMA beat him. Coincidence? Or LIBERAL CONSPIRACY???

A few weeks ago, I told you about how Chip Kelly’s installation of MEXICAN MAN Mark Sanchez as the quarterback of the White Man’s Team, the Philadelphia Eagles, was all part of OBAMA’s plan to bring about the downfall of America’s team, the Dallas Cowboys, grant amnesty to Mexicans, and destroy freedom.

The Philadelphia Eagles made it clear they’re still the team to beat in the NFC East with a convincing 33-10 win at Dallas on Thanksgiving. The Eagles (9-3) took over sole possession of first place going into the final month, but will play the Cowboys (8-4) again Dec. 14 at home.

They beat America’s team with a Mexican! And worse, they did it on Thanksgiving, the second-most American holiday after Black Friday (capitalism).

Obama’s sinister plan is all coming to pass.